The Kimberley of Australia: 5 Can’t Miss Places You Have to Visit + Travel Tips 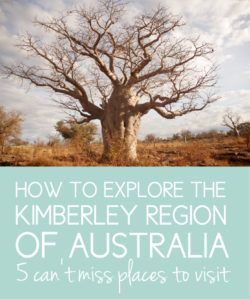 The Kimberley region  is the fourth part of our 45 days around Australia.  If you don’t know what I’m talking about, read about the whole trip here. Part one was spent in Adelaide and Surrounds, part two in Perth and Surrounds, and then Exmouth, Karijini, and Broome. Now we are up to Broome to Darwin. There is so much to share in this part that I’m breaking it up. I’ll cover the Kimberley region in the post, and my next post I’ll share all about Darwin, Litchfield, Kakadu, and Nitmuluk.

This is the part of the trip I was most excited about.  There is so much rugged outback with waterfalls, canyons, and all kinds of walking trails. We decided to save money we would go the highway route and just go inland a bit to do off-road.  This way, we could stay in motels without spending a fortune. We considered doing the camper van thing the entire time, but we didn’t want to have to pack up the tent every day, it sounded like a lot of work. The option of going 4×4 the whole way and staying in motels was too expensive, they charge a fortune for those places on the 4×4 track.

Below you’ll find all the places we stayed and our favorite part of each one, making it 5 places you can’t miss on the drive from Broome through the Kimberley.

Fitzroy Crossing is the gateway to an area called the Kimberley. Imagine outback life at its greatest and you’ll start to imagine the Kimberley. There’s gorges, crocodiles, waterfalls, insane rock formations, Boab trees, and sunsets that make the sky purple. It’s a special place and I feel blessed to have gotten to experience it. Most Aussies have never been there, and the ones we did meet were older retired couples who had waited their whole lives to go there. It’s pricey and hard to get to, but if were easy, it wouldn’t be so amazing.

Where We Stayed: Fitzroy River Lodge

This was a great place to stay. They had set dinners you could book in as well that were very good as well. It was buffet style and you definitely had to have a booking. There’s also a road right behind the lodge that we dubbed “wallaby way” because there were so many wallabies that came out a dusk.

This is going to sound weird, but there was an area we drove through that looked light a horror movie.  The Boab trees were spotting the deserted landscape and we were the only people around it was incredible.  It may not sound like a “favorite part” but it really was beautiful in its own haunted way. Plus, Boab trees are just cool.

While not crowded by American standards, Fitzroy Crossing is definitely the most “crowded” we had.  It’s basically the gateway into the Kimberleys so it makes sense. Don’t worry the following places are empty of people.

From here, you want to make sure you go to Geikie Gorge (25 min drive), Tunnel Creek, Windjana Gorge. Geikie Gorge has a boat ride you can do, but we were too late for it.  There is also transportation from Fitzroy Lodge to the Gorge boat ride if you’re interested in that.  Windjana Gorge and Tunnel Creek are about a 3.5 hour drive one way from Fitzroy Crossing. However, it’s an easy day trip there and back to both, provided you’re an early riser like us (and by early I mean we left between and 8 and 9 a.m.).

Windjana has heaps of fresh water crocodiles. These crocs are still dangerous even if their not as large as the saltwater crocs (or “salties”) they can still bite and that would hurt so be careful when (or if) you go. They aren’t as aggressive as the salties but if you get between them and the water, they can attack, so look from a distance. Also, be sure to take a flashlight (one per person) to Tunnel Creek, it’s a cave, and wear shoes you can get wet so you don’t have to go barefoot.

This was over the top amazing.  Very expensive, but you have an en suite bathroom in a “glamping” type tent.  It has your own personal patio and breakfast and dinner are included.  The meals were top-notch and the staff were incredible.

The best walk we did when a little past the main Cathedral Gorge (more on this later).

No place to swim! Honestly, the Bungles were probably one of my favorite places I’ve ever been, but man is it hot, and there is no relief from it.  I took cold showers and had chilled wine.

There are several great walks and sites in the Bungles that you don’t want to miss. They are as follows:

Be sure you stay in the park. Yes, it’s expensive, but it’s worth and you’ll feel like you’ve got the place to yourself. Plus, it forces you to go off the grid, no cell service, no wifi. It also gets very hot in the Bungles with little shade so you’ll want to get up early for hikes and it helps if you’re close to those hikes.

Where we Stayed: El Questro- The Station

For this, we actually had cabin one night and tent the next. The cabin was amazing and had a private balcony but it was also $400/night so if they had a tent both nights, we wouldn’t have stayed in the cabin.  The tent was not en suite but it was fun, clean, and much cheaper.

We kept getting told that El Questro was so over-rated but we didn’t feel that way at all.  It used to just be a cattle station but now there’s a restaurant, places to stay, a bar, and a general store. There are several off-road tracks and heaps of walking trails that have safe places to swim. We really enjoyed our time here.  It’s basically a “dude ranch”, outback style. Think resort type amenities meets camping.

We wished we could have stayed longer for sure. We spent two nights in this area and only had a 2.5 hour drive the day we left but I could have spent a week there.  You could swim, hike, 4×4, fish, ride horses, it has it all.

There are a couple of hikes and 4×4 drives we did that I highly recommend below.  Most people go to this area for Emma Gorge, but I think El Questro and Emma Gorge deserve their own separate mention. Therefore, don’t just go to Emma Gorge.  from El Questro, there are actually several other places to see that I wasn’t aware of before we got there. We were going just for Emma Gorge, but were pleasantly surprised.

Stay longer and go with an open mind. There are a lot of hikes and drives we didn’t have time to do, and would have loved to. You can also swim right around the lodge in the river. Yes, it can get crowded, but it’s really a fun place to go, so don’t let the naysayers tell you it’s not worth it.

This linked up with El Questro and then we went on to Lake Argyle so we didn’t actually stay at Emma Gorge, but it did look like they had nice “glamping” options there.

There are places to swim along the hike itself not just at the end under the waterfall.

Because of its popularity, it can get crowded. Just make sure you go in the morning to beat the tour buses.

There are a few places along the hike that are worth taking an extra look or swim. Below are my favorite ones you’ll want to see.

Make sure you pick up a map of the Emma Gorge hike.  It has numbers marked for the different sites to see along the trail (such as the rock swirls and the turquoise poo), it’s quite handy.

Where we Stayed: Lake Argyle Resort

The boat ride we did on Lake Argyle was top-notch. We saw heaps of wild life, swam in the lake, and were given wine and beer while we watched the sunset.

While the infinity pool at the resort is stunning, it closes early, so we didn’t get a chance to swim in it. I also wouldn’t call the place a “resort” it was more of a caravan park.

We only spent one night there and while I don’t think you need more time, it would have been a nice place to relax for another day, especially in that pool.

There is no cell service in Lake Argyle or Internet, so plan ahead and enjoy the peace.

Get your Christmas mini booked! I know it’s Augu

Run, don’t walk to book your holiday minis and f

River minis were a blast! Comment river to be ad