How to Visit Adelaide Australia and Why You’ll Love it Planning a trip to Adelaide, Australia?  Not sure where to start on the planning? There’s essentially three major areas near Adelaide that you want  make sure you see. Don’t miss Kangaroo Island and Barossa Valley.

Here’s how to make sure you get the most out of each of the areas. 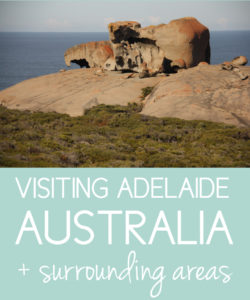 For Barossa Valley, we wanted to be able to really enjoy the wine, so we did a tour so neither of us had to drive. It was a great decision.

Favorite Part: Barossa Valley is very unique in that they really embrace the history of the area. On our tour, our guide was very good about telling us all about the region.  It was probably the best wine tour I’ve ever been on (and I’ve been on a lot!). The area is known for its Shiraz and they even boast having the oldest Shiraz vines in the world. Pretty amazing when you think about it.

Least Favorite Part: We went in the winter and that meant that the vines didn’t look as pretty but we did have less of a crowd! I loved this area so much it’s hard to think of a least favorite.

Final Verdict:  If you love wine, don’t miss Barossa.  Adelaide is so under-rated in Australia and it’s just not fair.  You’re so close to Barossa and all the little towns it encompasses.

We drove ourselves to Kangaroo Island.  I don’t really enjoy tours unless it’s somewhere I can’t take myself or it involves drinking.  However, it’s quite expensive to take a car to the island.  I booked ahead of time, online so I wouldn’t have to worry about it later.

Where we Stayed: Casuarina Coastal Units. This place was amazing. Highly recommend if you ever go to Kangaroo Island.

Favorite Part: Two parts to this Island are amazing. First, Flinders Chase National Park did not disappoint. The remarkable rocks are truly amazing and worth seeing in person.  There are also seals in the park that you can get closer to than at the Conservation area.  We did a hike as well that followed a river down to the ocean and it was spectacular. Next up is the abundance of wildlife on Kangaroo Island. We did an ATV tour where we saw kangaroos, koalas, echidnas, goanna (lizard), and the most poisonous snake in the world (we stayed away from that one).

Least Favorite Part: I was really excited to go to the seal conservation area on Kangaroo Island, but honestly, I felt like it was a rip off.  We chose not to do the guided tour because it was $35/piece and for $16 we could walk along the boardwalk by the seals and get basically as close.  The place is supposed to be about seals in the wild, but it doesn’t feel that way anymore. You can also get just as close to the seals in the National Park.  Another least favorite is that it’s also very expensive to take the ferry. It cost almost $300 for a small car with driver (round trip) and then another $96 for one more person in the car.

Final Verdict: Kangaroo Island is definitely a unique place and worth visiting. Everyone told us we needed more than the 2 days but I felt like we got everything in we wanted. We even took an ATV tour. You could spend a week there if you really want to explore and hike it out.

Biggest Tip: Do your research when it comes to driving.  It’s bigger than you may think and takes about an hour to get from one side to the other.  Also, everything costs, so bring money.

A few hours in Adelaide

We didn’t plan to spend time really in the city (we like the natural stuff better) but we smashed our one and only cell phone so had to go into town early before our flight to get it fixed. We then had some time on our hands before our flight to Perth so we decided to go to the National Wine Center. It’s free (tastings costs).  It was interesting enough but right next to it is a lovely botanic garden. We spent about 3 hours here enjoying the outdoors. It was lovely and a great, free way to spend some time.

I'm so grateful for all the beautiful families tha

LAST chance for holiday minis is this weekend! Nov

It’s not too late to book your holiday mini but

All the baby cuddles 🥰 #hillcountryphotograph

SANTA!!!! Thanks to all the families who came ou