The Sahara Desert Travel: 9 Things to Know to Make Your Trip a Breeze 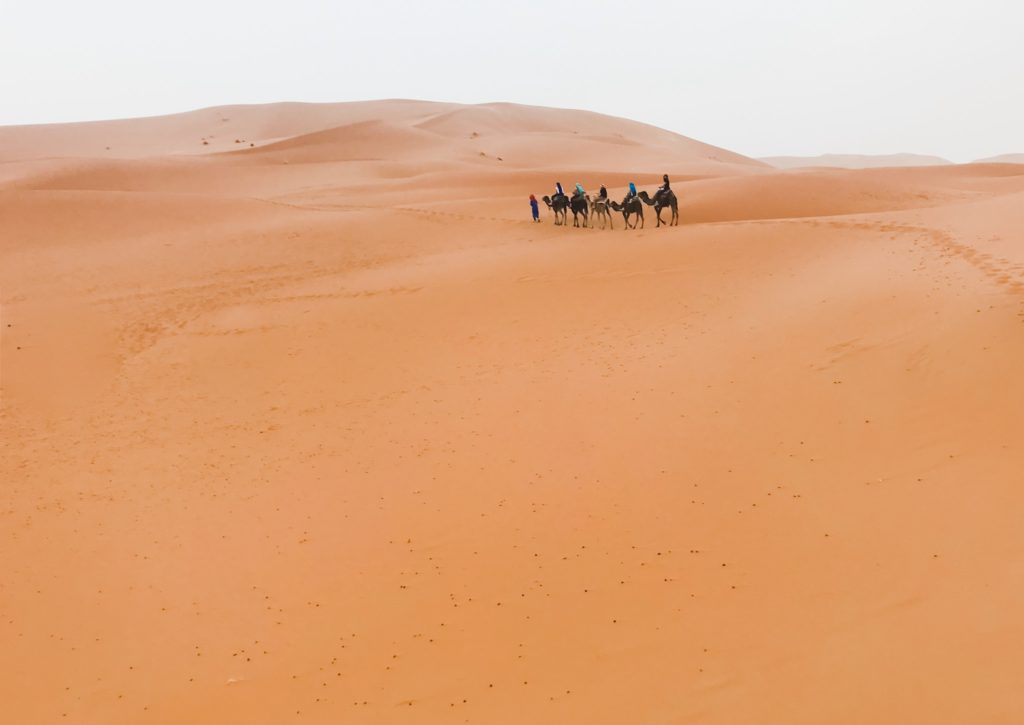 I recently returned from a trip to Morocco and during that time took a tour out to the Sahara Desert. I loved it but there were definitely a few things I wish I had known about before hand.

So today I’m sharing 9 things you need to know before you go to the Sahara Desert.

Traveling to the Sahara Desert

1. It’s Far… From Everything

Probably the first and foremost thing you need to understand is that the Sahara Desert is far from every town. We went from Marrakech and it was a 11 hour car ride (with stops) back on the last day. This shouldn’t deter you from going, but plan accordingly. However, it being far from everything is really part of what’s so amazing about it too.

Next up, if you have any special food requirements, you may struggle a little. The friend I was traveling with is vegetarian and we checked before we booked the tour that there would be vegetarian options. The tour we booked confirmed there would be and that we would just need to remind our guide when we were picked up. This was not entirely accurate.

We basically had to remind everyone and even when we did, they didn’t bring her vegetarian food until we told the actual waiter. Who then acted as if they had no idea. This was a bit absurd. The first place that we stayed gave her nothing but chips. Another closely related issue was that we never knew what time we were going to eat. Usually we had lunch about 3 and dinner after 9. The moral of the story is, bring snacks. 🙂

3. You Could Drive it Yourself

During the drive out to the Sahara Desert, I kept thinking that I could have driven it. To be perfectly honest, I’m a do-it-yourself traveller but only when I know what I’m getting into. I didn’t know how the roads would be or if it would be a difficult drive, so if you like to drive, consider it. Keep in mind, I have no idea what it costs to rent a car in Morocco.

I’ve also driven on both sides of the road, in third world countries, and on the side of mountains before, so my experience is extensive. However, I will say, this seemed like an easier place to drive than some others that I have already driven.

4. A Head Scarf is a Necessity (and not just for selfies)

If you’ve researched going to the Sahara Desert at all, then I’m sure you’ve seen the head scarves. Yes, they are necessary. One, it’s really hot and the sun is brutal and believe it or not, it’s cooler with the scarf. I know, what?! It’s true. Obviously, this can depend on the type of fabric the scarf is, so choose wisely. When we got up to the dunes a big wind storm came through and I was so glad I had the scarf. It was the perfect way to cover my face from the sand. No, you don’t have to buy one there but why not? It’s a nice souvenir and you support the locals.

5. Think Hard About What Electronics You Bring

I was very lucky because I had a friend that went to the Sahara and told me that the sand got into her point and shoot camera and it broke. Being a photographer and designer, it pains me to be without my camera and computer but I’m so glad I left them at home.

I still had my phone, which I bought a life proof case for and it worked perfectly. As I said above, a sand storm blew in right as we got to the dunes, so I was VERY thankful I didn’t bring my camera. The sand is so fine, it definitely would have affected it.

There were people on the tour that had a DSLR out there and it seemed they were fine with it, but I can pretty much guarantee there was sand lodged in the lens afterwards.

Something else that happened on our tour to the Sahara Desert was that it rained! While slightly annoying because we didn’t get much of a sunset, it was actually kind of cool as well. Not a lot of people can say they went to the desert and it rained. No, it doesn’t happen often, but it could, so be prepared.

7. The Accommodations are Excellent

A really pleasant surprise was that all the places we stayed on our tour were really great. We were in a hotel one night that was nestled in the mountains and super lovely.

The next night we stayed in camping accommodations in the desert and it was amazing. The place was super cute, and there was even entertainment at dinner. We stayed right in the dunes and tents were made out of Moroccan carpets.

If you don’t want to drive yourself, then you might consider a private tour. The main issue with the group tour is that the bus driver can’t stop whenever you want. There were several times when I wish we could have stopped but the group tours have specific stops and don’t deviate.

Another issue is that with the tour we took, was that we didn’t have a specified guide and the driver didn’t know where we were going once we arrived places. Each time we got to a new place, we had a new guide and they would tell us what we were doing. However, before we got there, it was anyone’s guess. That meant, we didn’t know when we would eat or what we would do at each place until we actually arrived and met our guide.

Finally, whatever reservations you’re having (if any) just know that it’s worth it. The drive is really beautiful and the desert is amazing. It’s definitely a bucket list item to ride a camel across the Sahara Desert.

Have you been to Morocco or the Sahara? If so, what’s your favorite part? Let me know in the comments!

How Much do you Love Travel?

I love it a LOT. If you’re the same, I’d love to connect and share stories. Sign up below to be notified of my newest travel posts.

Happy Easter! I’m on a campaign to bring bunnies

Hellooooo long weekend! How are you spending Eas

Sisters are the best, but I might be biased. @jess

Sweet Oliver was a trooper in the bluebonnets. @st