Planning a Greek Islands Vacation: Why Mykonos is Just as Lovely as Santorini 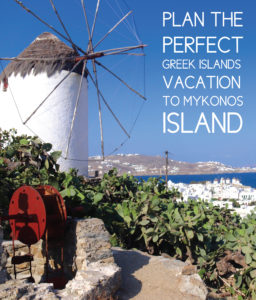 If you’ve ever planned or thought of planning a Greek Islands vacation then this post is definitely for you. We just spent a week in Greece and loved every minute of it. It was a quick trip so we only saw Athens, Mykonos, and Santorini.

Santorini was beyond gorgeous as expected, however, each one was perfect in its own way. The most surprising was Mykonos which is why I’m posting about it today.

I don’t think it gets enough love and is known too much as a party island. My husband and I go to bed at 9 o’clock and we don’t do clubs but we still loved Mykonos.

The first reason Mykonos is fantastic is because it’s so close to Athens. When I decided we would go here, it was really because I didn’t want to go all the way to Santorini in one day. That’s a 5 hour boat ride and I don’t do well with boats. However, I discovered that you could easily go to Mykonos, spend a couple of nights there, then move on to Santorini, thus breaking up the boat ride. I was really glad we did it this way. Not only did we get to see more, but our longest ride was 2.5 hours instead of 5. Win, win!

I also felt that Mykonos had fewer people. I don’t know if this is accurate but it definitely felt that way and would make sense. We were able to take loads of pictures without a bunch of people in them. You know all those photos you see with empty white streets and blue ocean behind them, most of those are Mykonos. It’s just less crowded than Santorini.

While in Mykonos, we stayed very close to the main shopping area and very close to a bus stop. We could pretty much walk everywhere except to the main beach. However we took the bus straight to the beach very easily.  It was great because we could get up early and walk the main area without all the cruise ships.  The thing about Santorini is that there are two main towns as well as several other areas to visit. Each with their own things to see and each a bit spread out. The busses also get crowded so there’s a chance you may not get on one. Mykonos is simply easier to get around, making your Greek Islands vacation run smoother.

4. To Party or Not to Party

As I said above, my husband and I don’t party so I can’t give first-hand info about the clubs on the island but I can tell you that you’ll have options here that you won’t have in Santorini. Mykonos has bars and clubs that stay open so you at least have the opportunity to go out if you want.

Yes, there are windmills in Santorini, but it’s definitely worth seeing the ones in Mykonos. There are several all in a row right on the ocean and it’s really quite lovely.

One of my absolute favorite things about Mykonos was Paradise Beach. We spent the entire day there, being waited on and sipping cocktails. It was fantastic and beautiful. There are also the options for beaches as well. Something I didn’t realize before going was that the beaches of Santorini are black sand. This is because it’s a volcanic island which is super amazing to see but not for a day at the beach. Because of this, I was really glad we did Mykonos as well so we could have a proper beach day with white sand.

Finally, I found that Mykonos was less expensive than Santorini. This makes sense considering it’s not as popular but it’s also nice. We stayed in a fantastic hotel for 60 euros/night. It was also right in the middle of everything. If you’re looking for a place to stay, be sure to check out the Myconian Inn.

I’d love to hear your travel stories. Connect with me below.

Anastasia can't believe you have almost missed the